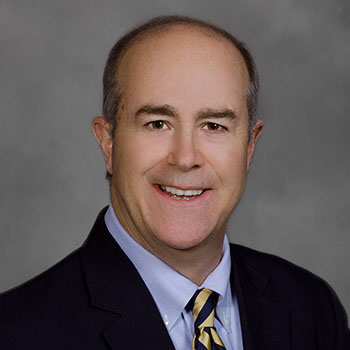 Talk to the hundreds of patients Dr. Murphy has helped in his career, and they’ll all mention his kindness and exceptional bedside manner. But along with kudos from his patients, this distinguished oral surgeon has also earned the praise and respect of countless peers, as evidenced in his long list of awards and certifications.

Dr. Murphy joined COFS after more than 30 years of running his own successful practice in Hanover County, Virginia. After his residency in Oral and Maxillofacial Surgery, at the Medical College of Virginia, he joined the practice of Drs. Clough and Wallace. He worked at their Mechanicsville office as well as other offices before branching-off and buying the Mechanicsville office for his solo practice.

Running a practice proved more and more complex, he became interested in joining COFS, where he could focus on oral surgery. Said Dr. Murphy, “I had trained and operated with Drs. Cuttino and Peters as a resident and a large number of the partners were co-residents at MCV, so I knew they were ethical, excellent clinicians and surgeons, and had a similar philosophy of patient care.” He joined our team in May 2022.

When he’s not helping patients, he can be found sailing on the Chesapeake, or taking on restoration projects in his 1902 Fan house.

Talk to the hundreds of patients Dr. Murphy has helped in his career, and they’ll all mention his kindness and exceptional bedside manner. American Board of Oral & Maxillofacial Surgery

Looking forward to “immersion travel” in retirement where we go to a country and stay for a period of time, picking a home base and immersing ourselves in the culture, visiting historic sites and dining- in between relaxing with sailing and local travel.

“What you leave behind is not engraved in stone monuments, but what is woven in the lives of others.” Pericles

Commonwealth Oral & Facial Surgery is committed to providing a safe environment for you, as well as all of our other patients and staff. Please view our full COVID-19 update or learn more about our infection control.